To The International Center Team,

I’ve been at The International Center for a month now, and while there is still a lot that I would like to discover, there are already some things that I know for certain about the people that power this organization. Each individual has a unique role and expertise that have been funneled through a concrete mission of the center and the leadership that oversees it. To see such a machine in action, and to have been an active part in it, really opened my eyes to what can be achieved with a small group of concerned and talented world citizens. 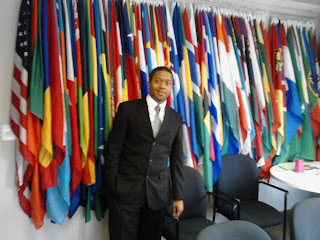 During my time here, I was able to work with Ms. Long in strategic initiatives. One of the first things that I noticed upon beginning the project was a confidence in my own agency. I was not only allowed to think critically and solve problems however I best saw fit, but was expected to do so. This freedom led to the construction of The International Center university outreach plans. I feel as though it’s my baby, and still feel uncomfortable leaving it, but I trust my team and have full faith that it will be completed to its utmost. I respect everyone here, and feel respected in return.

As I sit, gazing about my office space, there is a poster above the cabinet with a highly pixilated map of the world. The space where the International Center would be is colored in red. I don’t know this poster’s origin, but it has rested above my head and I look up at it from time to time. I’ve been here the longest of any of the interns, though, due to school, my stay is only a month long. And if there is anything that I would like to let the other interns know, it is this: We are a small yet important part of a very large world.

Our generation is accustomed to electronic information soaring across censors and oceans, but while our communication across this great planet has improved, the planets breadth has not decreased. The people that populate its shores and cities have not decreased. And while it may seem easier to hear about world issues and problems, they are no less difficult to truly understand. What I’ve come to know now, here at the center with this pixilated earth looming above my head, is that the people that really solve the world’s problems seldom look at the whole world, but just one pixel at a time. One project. One sister city alliance. One database. What we do here is permanent, every keystroke and phone call literally moves the world towards a more cohesive or chaotic place. Here, it isn’t theory or education, but practice and results.  This place, with its talented and varied people that somehow work together efficiently, this well-oiled machine with a heart of flesh, is only one part of a vast and unsearchable world. But look hard at the red square on the map.  For here at The International Center, the whole world is where we think, but it is in that one square at a time, that we can do.

Sign Up
New In The BuildingNaturalizations & New Years
Scroll to top