It is hard to believe that my time here at The International Center is soon coming to an end. Looking back over my experiences here, I think my favorite or part I find most memorable has been going to the Naturalization Ceremonies on Thursday mornings at the Federal Courthouse. It is amazing to witness the beginning of a new chapter in these new citizens’ lives. 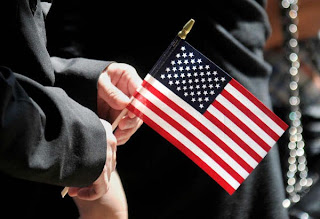 Each ceremony I have attended has been standing room only. The families and friends of these new citizens fill every possible space in the back of the courtroom. Each of them are proud to watch as their loved one takes the oath to become a citizen of the United States of America. It is a major   accomplishment in their lives. In the first Naturalization Ceremony I attended, we met a man that I will not soon forget. He was there to see his son become a citizen and from my understanding was on the path to citizenship himself. His face lit up when his son’s name was called and he was sure to take a picture, even though he could only see the back of his head from where we were standing.

This year for the Fourth of July Naturalization Ceremony Weilin Long, The International Center’s vice president of strategic initiatives and herself a naturalized citizen, presented a flag to the oldest citizen, or as the judge referred to her, the “most experienced citizen”, on behalf of The International Center. It was just eight years ago that Weilin was sitting in their seats after her journey on the road to becoming an American citizen. She, much like the rest of the presenters, seemed incredibly happy to play a memorable role in the lives of these new citizens. And I was incredibly happy to be present to witness it all!